Those who know me will not be at all surprised to learn that I keep meticulous records of my bike rides! At the outset of my cycling recovery, which started in January, I decided to ride a few routes which I could use at subsequent points in time to measure how I was improving. These rides would not be long - they couldn't be because I had to be able to do them at the beginning! But they would be reasonably all-out efforts, on as similar equipment as possible.
I now have data for three rides on two of the routes, and here is one of them, I call it Torkington Road Loop CW (clockwise). Briefly it is the descent and pull up from my house to the A6; the A6 to Hazel Grove; Torkington Road to Hawk Green and then Marple back to New Mills via Strines. It's 14 miles. There is a long descent between Disley and Hazel Grove, and a long ascent between Hazel Grove and Hawk Green. Here is a map:

The numbers in the following table come from my GPS and from Strava. The speed, power and heart rate are the averages for the ride. Weight is the weight of everything out of the door, i.e. me plus bike and stuff in pockets.


To be honest I wasn't really expecting such a big change yesterday. I felt pretty tired straight out of the door from the ride I did on Saturday. I knew on the gradual ascent between Hazel Grove and Hawk Green that I was a lot stronger though - the first time I did this ride that road seemed very hard. Yesterday it was not as bad and I managed to push all the way. I didn't use the small chainring at all yesterday. I knew I would knock off a few minutes but I'm surprised and very happy it was 8. That's over 30 seconds per mile :)


I think it's also interesting that my average heart rate is down as well. You can also see my body changing from the following histograms. Not sure what a sport scientist would make of these, but to me it looks like a pretty significant improvement when taken together with the times and power outputs. 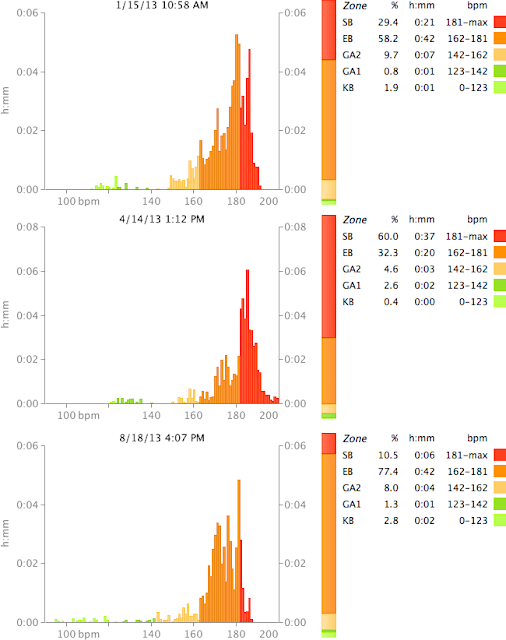