Yesterday I was at the hospital again, for my routine x-rays and check-up. I didn't take a photo of my x-ray this time, but suffice to say that there has been more improvement! Looking at the cross section, two-thirds of the bone seems to be healed now. There's still a gap on the inside of my leg, but it doesn't look as big now. 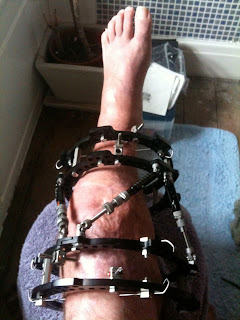 So, the struts have been loosened. This means that they're still there (see photo), but are now not under tension. I was a bit nervous at first because basically this means that the two sets of rings are not firmly connected together anymore so in principle my leg could shift if the break hasn't healed enough. If I notice it shifting at all now I have to reapply the strut tension and set them back to how they were before yesterday.

But after 24 hours it now feels almost the same strength-wise as it did before - I think that's a really good sign. What's odd now is that it rattles a lot which is a bit disconcerting! Also, the rings at the bottom can move if you press on them, which is also very strange because they are bolted to my bone so it must be moving too. I guess this means that the bone hasn't calcified yet, but that would be normal - I saw this last time when they took the frame off.

What's next? I'm going to be like this for 2 weeks - enough time to see on a new x-ray whether the bone has shifted. If it has, I think the tension will be put back on and the struts put back in position. But on the last 24 hours' evidence, I don't think it will shift, so then I think the struts will be removed completely. That will be another adjustment mentally for me but it might be better because at least there won't be the rattling! Two weeks after that, assuming no shift of the bone, will be the earliest the frame can be removed. That would be early August I think.

The consultant said he'd like to see a bit more growth into the remaining gap before he removes the frame completely. I agree. In fact I'd be in favour of erring completely on the side of caution this time - I don't want to end up needing another corrective operation, and it's been so long now that another month or two is insignificant. Of course, the frame is awkward and uncomfortable and causes some pain at the pin sites, but leave it on as long as possible I say.

And I like it that I'm going back in 2 weeks - these visits are the milestones which I have to pace myself against - the more frequent the better.