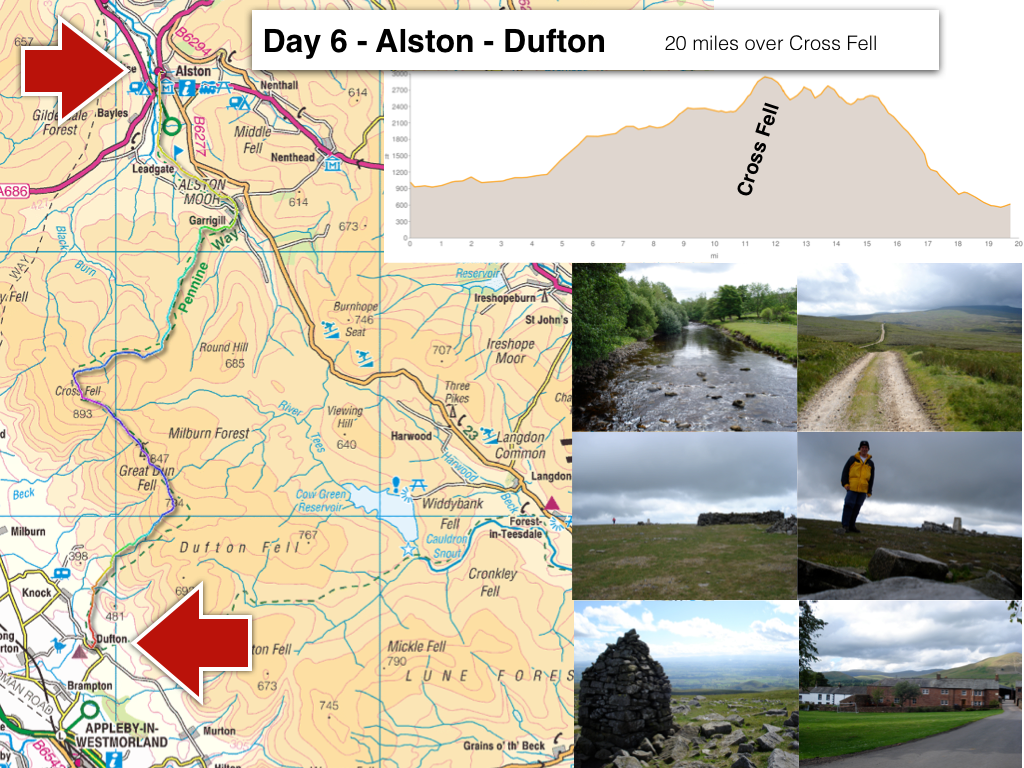 0854 The Crown, Alston
Breakfast in the bar. Lovely. On my own of course, but Vicky has made it all really good. Slept like a baby last night. Legs ache, feet are sore, but getting used to that now!
Plan: shopping, leave Alston 0930-1000, Garrigill ~1200, Cross Fell sometime 4-5? Let's see how that goes...
1148 Garrigill
Looks like rain. Of course it's Sunday so everywhere is closed here but it looks like a pretty sleepy place anyway. On the way here went through a field with bull in, kids going in other direction scared to enter field, amazed that I just walked through with a red jumper on ;)
Later on Cross Fell
On the top of Cross Fell, at the hut - bumped into Keith again - he's staying here overnight - strange! But anyway, weather is good and clear, lucky I guess, it could be an absolute nightmare up here!
Later on Little Dun Fell
V. v. windy. In windbreaker here not too bad but cannot stay long. Still, this is more like what the PW should be. Enough of that farm nonsense!

1637 Knock Old Man
Still v. v. windy. Apparently this ridge is one of the windiest places in the UK. There's a reason for it which I can't remember.
1817 Arrived Dufton
V. sore. Contemplating whether to camp, weather is not bad. In the Stag Inn to think about stuff - food looks good here, will come back later. Maybe I should YHA it tonight. I'm also wondering what happened to those two guys I saw just outside of Alston - going in this direction. Looked like one of them was struggling with some knee or ankle problem.
Later @ The Stag, Dufton
OK, so decided to go to the YHA. Nice lady, Annette?, who runs it, had a chat about YHA general stuff. Shame how things have gone with that - profit apparently does matter, although it is a registered charity. Met Tim in the YHA - staying in the same room - he's doing the PW for the 10th time!! So obviously he knows the route like the back of his hand. Chatted route a bit, he told me how to avoid the bogs just north of Byrness. Apparently you just cross the border fence - and then cross back later. Hmm.

Dinner in the Stag - massive portions! Good. And a few beers. Nice. Today I really enjoyed, on account of the 'proper' walking - not just crossing farmland which after a while does my head in.

Dirt tracks are a bit boring but you can make good time on them (ascent to Cross Fell).

What a day! Probably the best day so far. The weather was very good to me, lucky like on Day 1. It could have been really awful up there on Cross Fell and along the ridge. It was very windy, but it remained dry and clear throughout. Even in poor weather the only place it could really go wrong from a navigation point of view is on Cross Fell summit because it's flat and featureless. There are numerous cairns up there which would help but it'd still be tricky in poor visibility.

View today's photos on a map at Flickr.
Posted by Andrew Markwick at 16:54:00