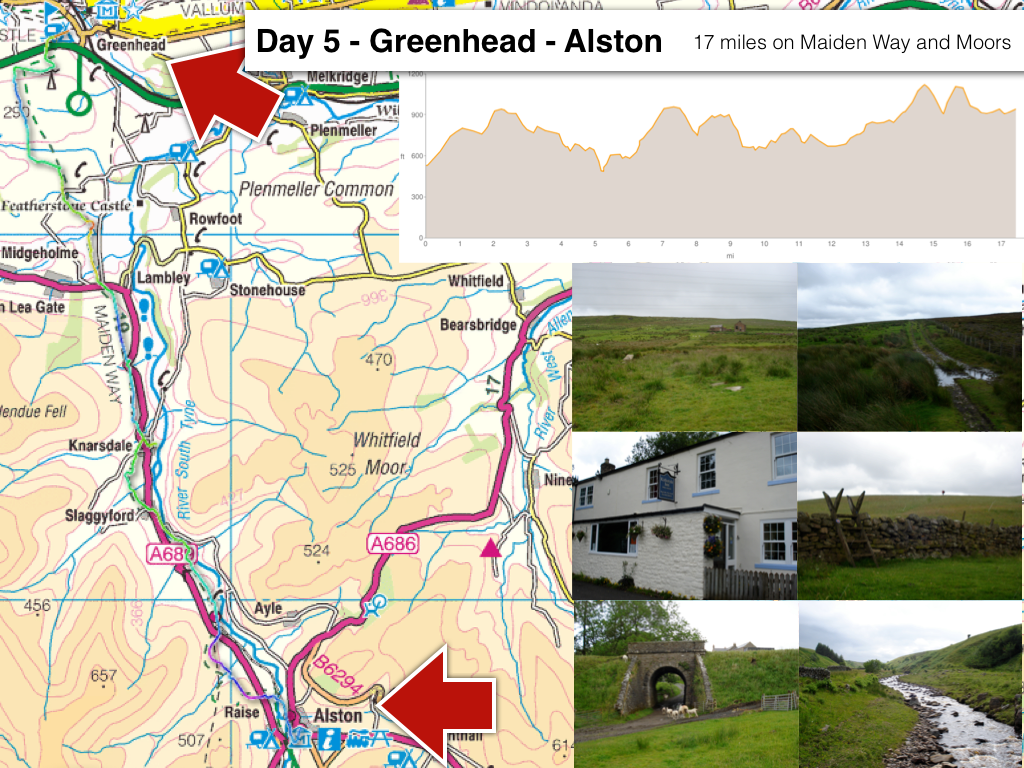 Campsite shower, no hot water. An inauspicious start. Have decided to skip the nasty bit and road walk until the Maiden Way. Packing up camp now.
4 miles into the day - decided in fact to do the proper route after all. In for a penny, etc. Would have regretted not sticking to the route if I'd done the wuss-out option. Walking with a guy called Keith who left Greenhead at the same time as me. He's OK, but I don't want to walk with someone else all the time. Actually, the 'worst' stretch there on the moor wasn't nearly as bad as reported.
1043 Maiden Way 6.9 miles from GHD
Changed left foot socks. Back in heather moorland again now. Nice.
1200 Kirkstyle Inn 9.8 miles
Perfect timing - said closed on the door when we arrived, but 12 is opening time. Had a nice beer, a coke and ordered some chips.

1700 Alston
Managed to drop Keith upon entering the town - he's going to the camp site but I have been forewarned about it so am not going. Doing this walk alone, remember, anyway. Uncharitable perhaps. Went looking for rooms therefore - tried everywhere, but everywhere full - apparently there's a wedding on. Anyway, came into The Crown and Vicky the landlady said "if you're not fussy I can sort you something out". I almost replied "do I look fussy?" but was too relieved to be smart. She seems very nice anyway and it turns out that they used to do B&B but are redecorating. Actually, the room she made up for me is just perfect. I went across to the Victoria Inn to give her chance to get it ready, but it's just fine. In the Victoria I overhear a conversation about the Crown being the 'late nite' destination in Alston... Hmmm... should be interesting later on then.
1915 The Crown, Alston
Had a bath! Fantastic. I like this place. The room is lovely. There's working radiators so everything can get dried out. Would have paid twice as much for that convenience alone!
What can I say about this section then, Greenhead - Alston? Well, i) the weather wasn't as bad as it could've been, but ii) it was very boggy in places - remember that stile in a lake? Only careful inspection revealed a well-placed stone, otherwise I would certainly have got soaked - there was barbed wire too along the fence, so just climbing it was not possible either. iii) there was more to see today than I expected, railway stuff (disused), viaducts, Gilderdale Burn - v. beautiful, Kirkstyle Inn (not perfect, but a welcome sight).

1950 The Cumberland Hotel, Alston
Sharing a table with a nice if quiet old man. He is reading a map and so I (wrongly it turned out) assumed he was a fellow PWer. He's not, turns out he's interested in all the old mines and is going up Cross Fell tomorrow to explore. Well, I'm going that way too, but I won't be hanging about!

Interestingly just now a couple came over and asked if I'd like to join them in their room later for a drink! Well, of course I accepted but I think they must think I'm staying there - but clearly I'm doing the PW - books, maps, etc. - and they are too I guess and want to pick my brains :)

This is the day when the PW joins the Pennines! North of the Wall it's really more like the Cheviots. So it is curious that the walk decides to go down the South Tyne valley rather than take to the high Pennines as early as possible by going a bit further west from Greenhead and starting up Cold Fell. From there a high-level route looks possible to join what is the actual PW at Cross Fell. Wainwright makes remarks similar to this about the route - it's as if the PW somehow wusses out by taking this low-level route to Alston. I need to look up the history of the trail and see if there's a reason for this. It might have been a land issue or something.

The man I met in The Cumberland Hotel reminded me of Daniel's dad Colin.

I really don't understand still why that group invited me up to their room for a drink, but they did pick my brains about the route north of Alston so maybe it was that simple. Anyway it was fun.
View today's photos on a map at Flickr.
Posted by Andrew Markwick at 17:30:00