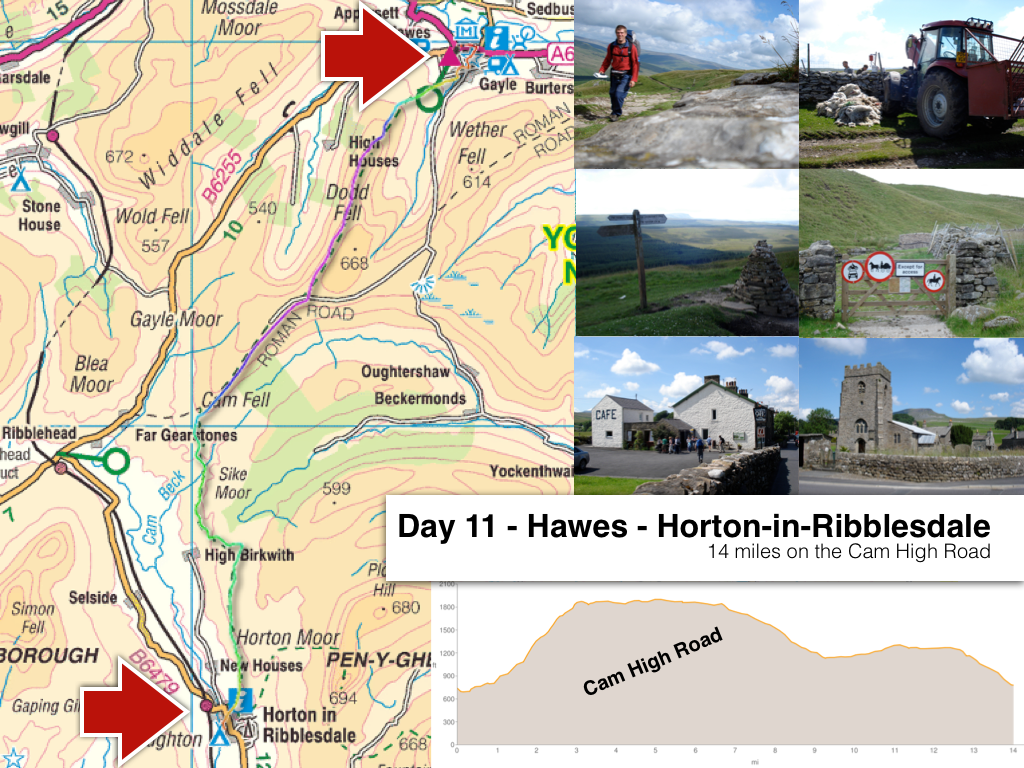 1028 Ten End 3.4 miles from Hawes
Steep long climb up from Hawes towards the Cam High Road. Windy, but sunny. Should be relatively flat now for some miles.
1118 Cam High Road 5.8 miles
Roman road. I have of course done a bit of this path before, in the midsts of the past when I did the Dales Way with Jonathan Arkell. Looking ahead from here you can see Pen-y-ghent, but that's for tomorrow. Otherwise it's perfect up here at the moment, could be incredibly grim as it was on the Dales Way, but today, lovely.

1252 Ling Gill Bridge 9.4 miles
Need a rest!
1440 Pen-y-Ghent cafe, Horton 14.3 miles
Arrived Pen-y-ghent cafe, Horton-in-Ribblesdale. Got some badges to glue to my rucksack sometime in the future. Signed the PW book - saw Paul and Colin and Tim's [people I'd met so far on the way] names in it - cool! Loads of school children here probably on a trip? Nice place to come for a school trip if so. Interestingly the man in the cafe knew Stokesley - he has a friend on The Avenue, turns out it's Sarah Chapman's dad. He made a note of my name. Small world isn't it?
Later, The Crown, Horton
Been to the campsite: "No vacancies" - a bit odd since the field doesn't look anywhere near full. Maybe they have a maximum number of people. Anyway, I have repared to The Crown for a pint of Old Peculier (on tap) to consider the options: The Golden Lion has a bunk room - or I could wild camp somewhere. Hadn't expected to come unstuck today.... So, I was talking with the barmaid here and she reckons I should just go over and ask at the campsite in spite of the no vacancy signs... seems odd but I guess I'm going to try it :)
There's no network here of course, not necessarily a bad thing. Today's walking was quite straightforward and encouraged a faster pace and not much stop time. It's amazing how the weather plays such a role in all this. Only one minor navigation problem today, on Cam End there's no sign or cairn to tell you you have to turn left off the main track which continues as the Dales Way towards Ribblehead. I also realised today that the hill I've been seeing which I thought was Pen-y-ghent is really Ingleborough. No wonder I was confused. Today has been really good - proper walking - the Pennine Way does not have a lot of it I think. But that's why it's the hardest. And I'm doing it because it's the hardest :)

The weather is glorious today, bodes well for tomorrow, really warm and sunny. Makes such a difference to how difficult this is. Hope it stays like this into tomorrow... Well, better go back to the camp site and see what's what.

Later
Back in The Crown now, food ordered. Camp site all sorted out. When I went back I spoke to the man in the field and he said they "keep some" places back for "people like me", i.e. walkers on PW. That's great, but I didn't get that from the sign on the gate! Anyway, I was there at the same time as a nice young lady on her own seemingly. Wanted to ask her if she'd like to go for a drink but I didn't. After that I noticed she was pitching her tent next to mine. Maybe I'll talk to her later on if she's still there.
1819
Written postcards. Hungry! Just looked back through the pages of this little diary. Good stuff! And guess what? I AM going to do this :)

Later
I did speak to that girl over a bottle of wine. She lives in Yarm! The camp site is busy because there's a charity walk on tomorrow. Anyway, it was a beautiful still night only punctuated by the insane giggling of the two girls pitched right near me - went on until 2am.