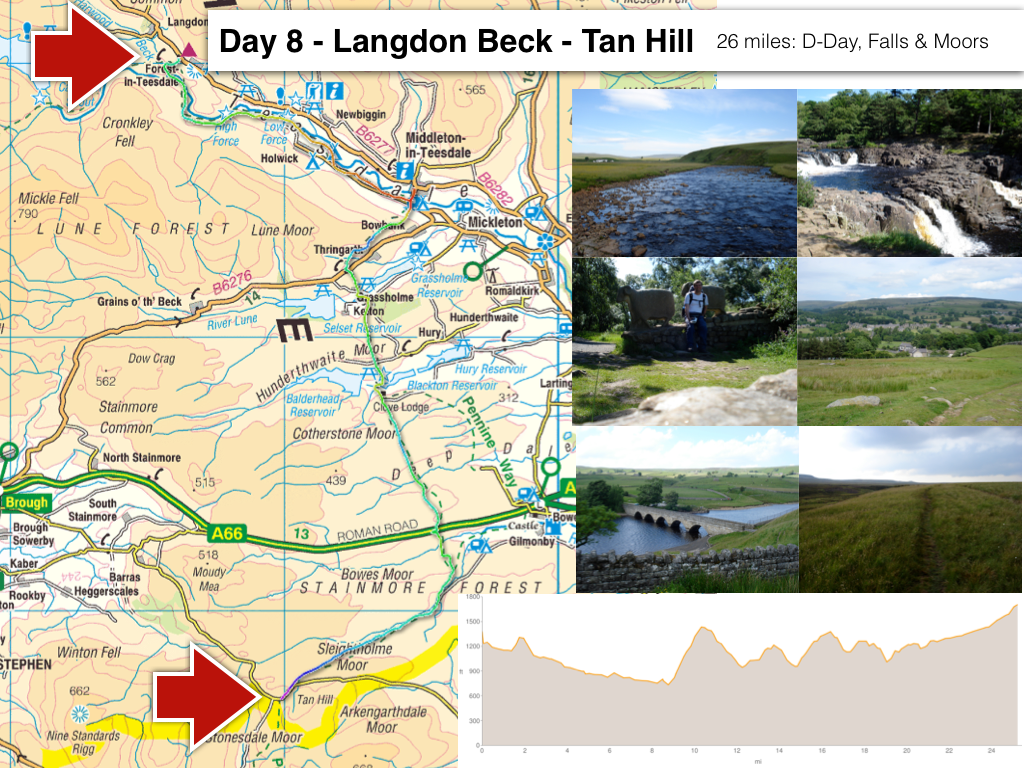 D-Day. I will be really gutted if I have to give up, but it is simply not a good idea to go on over those moors south of Middleton-in-Teesdale with a dodgy knee... Seems like a nice sunny day today though.

1015 High Force 3.6 miles from Langdon Beck
Knee still quite painful, any kind of downhill slope at all and it hurts with every step. Not good.
Middleton-in-Teesdale 8.5 miles
Having a few beers by way of lunch in The Teesdale Hotel. Been to the chemist and they don't have any Compeed in but they're getting a delivery at 1300 so I will wait for that. Tried to phone home, but there's no signal here in town, so I'll have to do that later too. I can send messages though so that's good. Assuming that when I stand up there is no pain, if I can make Baldersdale by 6pm I will push on for Tan Hill, even though that leaves many miles still to go today.

1617 Clove Lodge, Baldersdale 15.17 miles
It has turned into a hot day. Almost sunburn hot. A friendly dog here has come to see me while I eat a chocolate bar. I'm ahead of schedule and remarkably the pain in my knee has disappeared! Very strange because it really was very painful until I had that sit down in Middleton. There is a bunk barn here but I will almost certainly push on. A little rest here for a while first though.
Tan Hill Inn 25.67 miles
Made it!! Really amazed about my knee, because it still hasn't hurt once since Middleton. If anything my neck hurts now! I'm bloody knackered as I sit here in the bar. The last 4 miles along Washfold Rigg is another infamous stretch of the PW, rumoured to be awful bog in true Lyke Wake Walk tradition. Today however it was damp but no difficult stretches, which was just as well because it came at the end of a long day. You can see the Tan Hill Inn, highest pub in England, from about 4 miles away, and it seems to get closer so so slowly, but eventually of course you arrive and then tiredness hits you properly. This pub is a real find though - the bar is cosy and the beer is good. There are sheep sheltering outside the front door of which the pub has two - a kind of airlock system to keep them out!
Spoke to Mum - they have booked us into the Keld Lodge tomorrow - v. nice. They won't be there until about 4 o'clock which means I can take it really easy tomorrow and of course I'll get a nice feed and clean up courtesy of Mum and Dad. I'm actually tempted to dump my camping stuff as I'm hardly using it. We'll see.
I've got a bunk here for tonight so I don't need to pitch the tent which is a good thing as it's already getting late. Paul and his mate are here too - they were surprised to see me as they knew I'd stopped at Langdon Beck yesterday, but they had said to each other that I might show up...

I've rarely seen people allowed to serve themselves a pint in a pub, but you can here!

Wow! Another big surprise today. To this day I really have no idea how come that pain can just have disappeared. It hurt a lot all morning, then nothing again all day. Quite amazing.

Crossing the A66 was strange - the tunnel is basically just a corrugated metal tube like a pipe. You can hear the road from a long way away, but the sound disappears quickly on the south side.
Posted by Andrew Markwick at 16:00:00