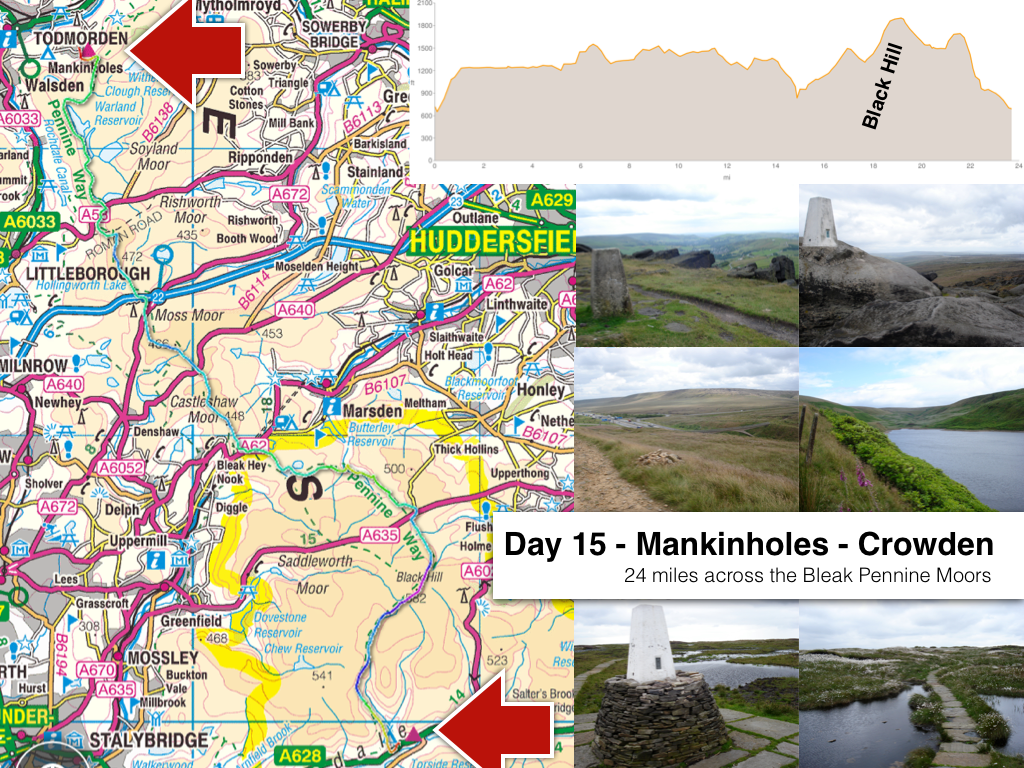 0815 Mankinholes YHA
Awake. Looks dry today thank God. We'll see how my body is etc when I stand up! This is the penultimate day!! Just one long moorland march and I'll be within 6 hours walk of the end. Edale, I'll never look on you the same. The highlight of today may well be crossing the M62 on that bridge - or Black Hill, don't know. Let's get on with it!

1946 Crowden
Arrived Crowden 1850 - no one in reception on the camp site here so I just pitched - just met the guy now he says everything OK. Shop opening again in 10 minutes - will get milk and stuff. Should cook but the place is crawling with midges. And it keeps on raining a bit.

Anyway, how was today? Good. Long, but good. It didn't rain on me much, otherwise it would've been the proverbial. It was a long way though, about 24.5 miles door to door. Crossing the M62 was interesting - a little bit scary actually - and there were lots of trig points today - 4 I think; Blackstone Edge; White Hill; Standedge and Black Hill - which really would be impossible without slabs - God knows how they used to do this walk. There was also a lot more climbing today than I thought by looking at the map last night. Amazingly this has been the second most climbing day after Day 1. No wonder I'm knackered :)
Still, I am now on home turf - only 16 miles over Kinder to go. There's a monster climb tomorrow morning but once up there it's a moorland trudge on slabs. Forecast says light rain.
Oh, today I lost a glove. Dope! Now my left hand has to go in the pocket. I think I may have lost it when I went to the toilet! And I had some trouble fording some streams coming across Round Hill Moss - a couple of times my foot was right in the stream! And today was the first time a bog tried to suck me into it. Not so bad, but weird feeling.
2110 Crowden
Just had my dinner - that Uncle Ben's stuff I've been carrying since KY! Actually it wasn't bad - and I had a bowl of coffee to wake me up a bit. Bought some bacon for the morning. Aim to leave about 9 means up and functioning at 8. Going to read "Into the Wild" a bit now, until it gets too dark.