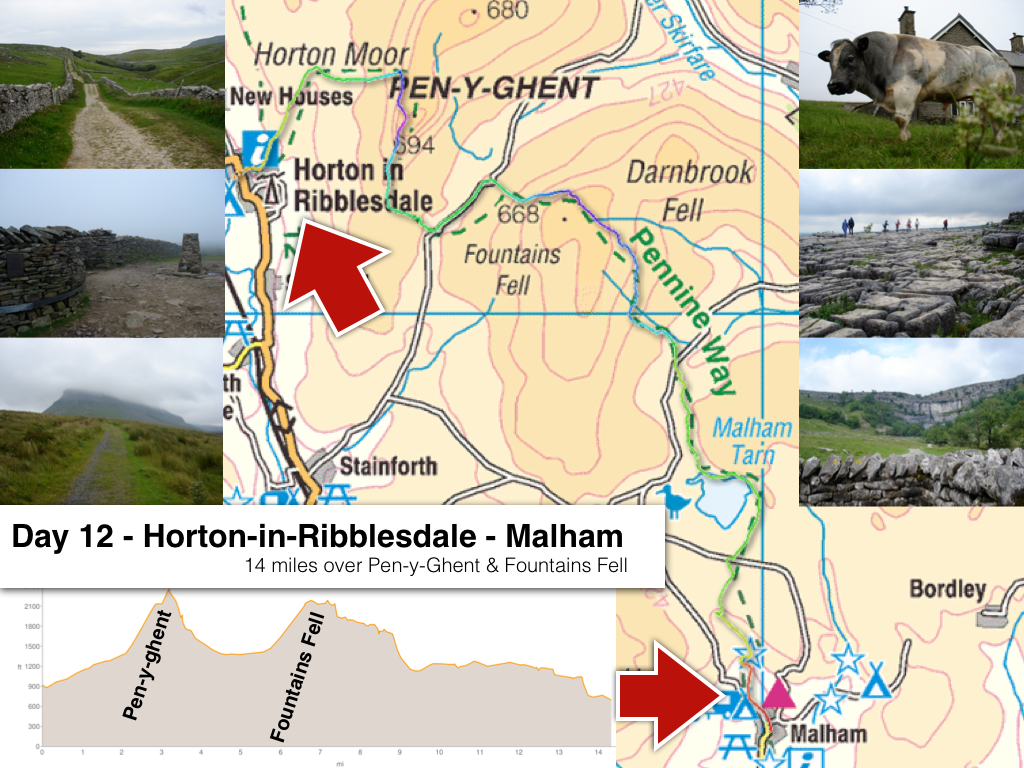 Up early, slept OK. But the weather has changed :( Looks OK now but v. windy and may rain later. Not particularly encouraging especially after the promise of yesterday. Ciska is meeting me in Malham tonight so hopefully when I get out of the valley there'll be some signal and I can get hold of her.
1431 Malham
My God it has rained cats and dogs on me today. On Fountains Fell I'd have been drier under an actual fountain! Anyway, I made it to Malham - just got my head down and pressed on - and still no signal so I don't know where I'm meeting Ciska. Oh! and disaster! It was so wet that my little journal is ruined :( :( A lot of the stuff I've written is smudged and illegible now. Hopefully I can reconstruct it later but not sure [some parts I couldn't remember but turned out mostly ok - that's where this write-up comes from after all]. A lot of the statistics I was recording have been erased :( That bloody coat isn't waterproof any more. And my feet are wet. I'm all wet, and now I'm getting cold because I'm not moving any more. Shivering now. Need to find out where we're staying!
Later
OK turned out Ciska had gone for a run, but now all sorted. We're in the Miresfield B&B. Had dinner in The Lister Arms which was very good. Nice to see someone again. Doing it solo this is probably a good idea - to have stops where you meet friends or family once or twice. Keeps you sane!


Comments
Pen-y-Ghent summit was incredibly windy. I was clinging on to my map! Then you have to go off the front of the hill down a steep stone staircase. With the wind and my big rucksack on, this was quite scary. I could've got blown off easily - the wind was supporting my weight it was that strong.

And it really did rain a lot on me up there on Fountains Fell. Normally I would have taken more pictures and written more in my little book, but it was just too horrible. I could barely see 2 metres ahead of me up there, with the rain and cloud and everything. I saw a couple of people and I almost went the wrong way once, but it worked out fine. If I ever do the PW again, I'd like a clear day on this stretch so that I can see some views! This area really is one of the most beautiful in the country though.
Posted by Andrew Markwick at 14:30:00