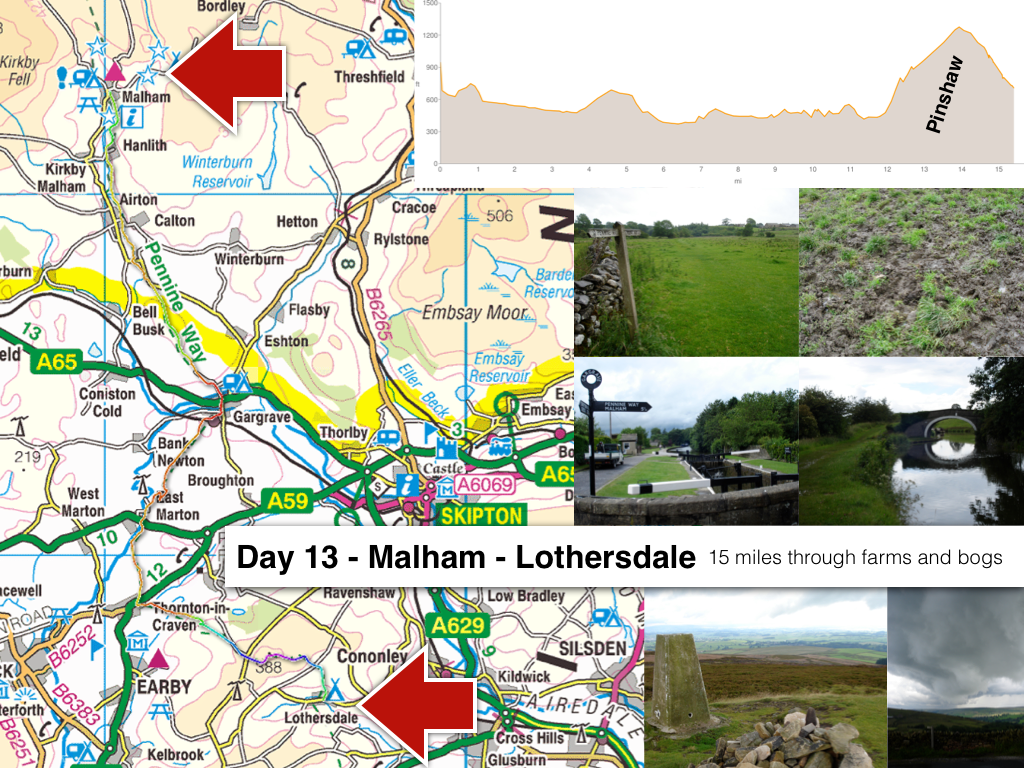 0933 Miresfield B&B, Malham
Had a nice breakfast in the B&B here with Ciska. All stuff is dry amazingly after all that rain. Will put this little book in my hermetic bag today, after the horse has bolted so to speak. I should've put it in yesterday when the rain started but it was so bad I just put my head down and shut out all thoughts except putting one foot in front of the other. Today I'm making for Lothersdale or Cowling so it'll be 14-17 miles. 4 days left including today.
1235 Gargrave 6.6 miles from Malham.
Started wet from Malham but has brightened up towards Gargrave. In the Mason's Arms (Good Pub Guide) for a pint of Landlord. Started spitting again upon arrival here. Phone battery flat. Should've charged it last night. Dope. So far today mainly river walking and pastures. It's been easy going so far. At one point I met a Dutch couple going the other way. Seen the Leeds-Liverpool canal for the first time today just now. And in Gargrave they have a sign post saying Edale 70 miles, KY 186. Good stuff. I think 186 is wrong though, I make it about 200. Should go back and get some cash before I leave.
1635 Lothersdale 15.8 miles
Further than the book says. Got 'lost' twice today in poorly signed fields. Lots of agricultural bog too - I hate it - arrived here with God knows what in my socks. Right 3rd toenail hurting now - funny how Ciska just asked if it was OK - it has been until now! Don't know where I'm staying yet. Will ask at bar in a bit. I'm in the Hare & Hounds by the way. Barefoot at the moment so really hope I can stay here tonight. Feet always itch and feel weird when they've been wet in the boots. Charging phone in pub here - still no network - Dales must be a black spot or something! - I would've tried it earlier but I obviously left it on yesterday and the battery was dead.
I think the PW weather gods hate me today. It's now quite pleasant, but it certainly wasn't before... couldn't see Pen-y-ghent from Pinshaw Beacon. :( Maybe if it's clear tomorrow I'll see it from when I go over to Ickornshaw. Tomorrow's going to be a bastard long way - and the day after - and then I'll drag my carcass over Kinder to Edale... :)

Today was another 'link' stage - too agricultural for my liking - OH! - I got chased by cows in a field just before Thornton-in-Craven! I had to run up a steep slope to get out of their way!! Another first for me on the PW. What happened I think is that crossing this field I accidentally ended up inbetween the cows and their calfs and they went all defensive and mental. Maybe they didn't get that close to me but I wasn't looking I was dashing up the slope with every ounce of effort I had! Quite surprised - never seen cows get upset before. Thing is, they're thick animals, but they're heavy.

1720
So according to the bar staff here there's no B&B in Lothersdale only camping at that Lynmouth place... so, could be camping tonight after all! Unless I plod on to Ickornshaw.

1752
Just rang home and a few B&Bs - either not there anymore or full. Not sure what to do now.. Lothersdale is obviously not the gem that the book says it is... Thing is, it's so nice outside now as well, maybe I should walk on a bit.. or just go and set up camp and have done with it... at this Lynmouth place.

1837
So, got my tent up at Lynmouth just in the nick of time before the rain started again. The weather is so changeable! But maybe it was just a flash in the pan because it's stopped again now and I'm back in the pub :) Apparently there's some signal here, I could receive texts and surf the net.

Started reconstructing the little journal that got water damaged - maybe the damage is not irrepairable - I can make out some of it and in any case when I get home I'll type it up quickly to capture the memories [ha! only took 4 years to get around to this!].

Later
So had soup (cream of vegetable) and gammon steak in the Hare & Hounds here. Came back to camp and read 'Into the Wild' until dark. Good book but such a sad story in a way.