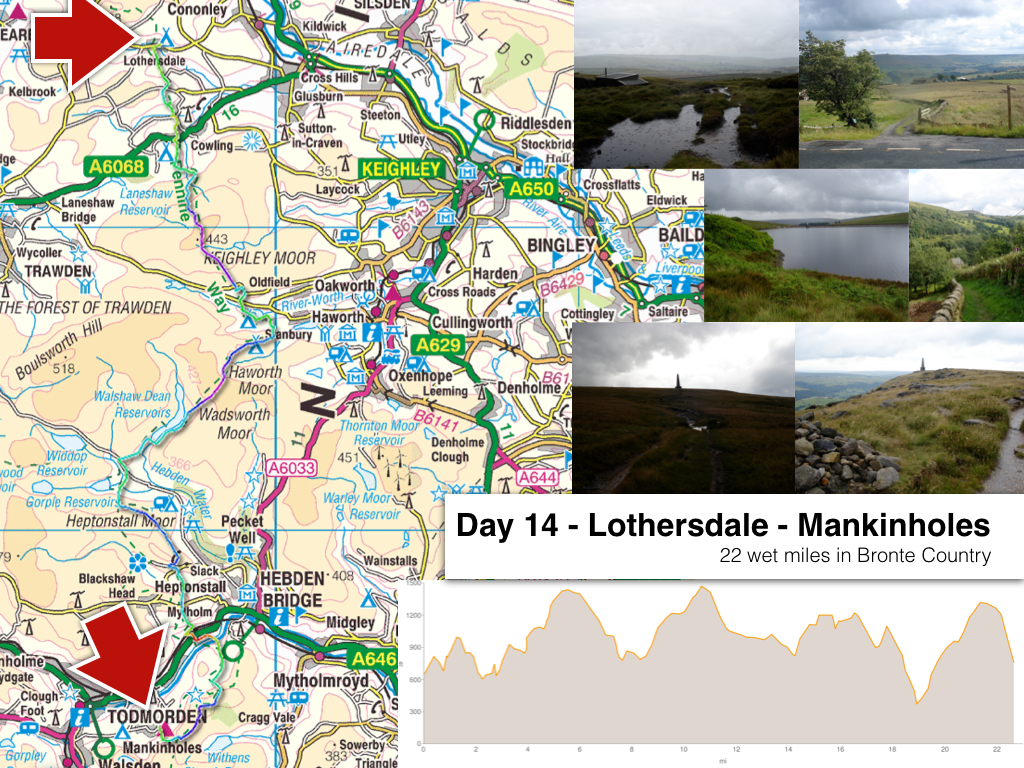 0837 Lothersdale
Up at last.. rained in the night. But reasonably bright now. Sort out feet, sort out GPS traces, then I'll pack up and move on. Long day ahead :)
2050 Top Brink Inn, Mankinholes
Oh my God what a day! Rained about 6 hours solid. Finally made it to Mankinholes. And thank God they a) were open; b) were still a youth hostel and c) had a bed for me.

That was a long way with a lot of climbing compounded by the weather - I wrang my socks out twice - my feet were wet after 2 miles! Once again the book is nonsense for distances.

It did clear up for the last two hours but my shorts wouldn't dry out and now I have painful chapped skin on the insides of my legs... Pray for it to heal overnight and for clear, dry weather tomorrow...

Right now I'm in the Top Brink pub - my God I needed a beer. I can totally see why Dad gave up here. They have about 10 beers on draught!

The paths on this walk are occasionally not very good, especially around towns that are not in a national park. There was a bit where I was supposed to walk between 2 walls through all manner of nettles and stuff - luckily there was a nice field parallel to walk up! The people in the house there thought I was lost - I wasn't - I just could bloody believe that that was the path! It's the premier national trail ffs! Lots of up and down today as well. Saw Top Withens - just a ruin. But it's true that some of the signs around Haworth are in Japanese. Weird!

The fact that is had rained so much of course meant that all becks and rivers were in full force - at Hebble Hole it was so powerful!

Isn't cumberland sausage usually a spiral? Maybe I'm wrong but anyway... it was nice too, and God I needed it. Now on 3rd pint of Lomond Gold's Blonde Ale @ 5% - need to go after this and it'll be dark soon... and the door closes at 11 - not that that's a problem - I'll be back at half ten.. then I can check on how all my stuff in the drying room is doing.
Later @ Mankinholes YHA
So back at the YHA - my inner thighs really hurt from the chapped skin. Have put more savlon on them - doubt they'll be painless in the morning though :(

You can see I think that I was getting to the point now where I really needed the end to come. I wasn't writing as much in the journal during the day and this day in particular I remember the walking was quite hard because of the weather. My camera lens steamed up so a lot of my pictures came out blurry too.

Of course there was no question now that I wouldn't finish, but I had a conversation with the manager of the Mankinholes YHA who told me that after I finished this walk I wouldn't want to look at my hiking boots for a very long time. As it turned out, he was right!
Posted by Andrew Markwick at 17:34:00