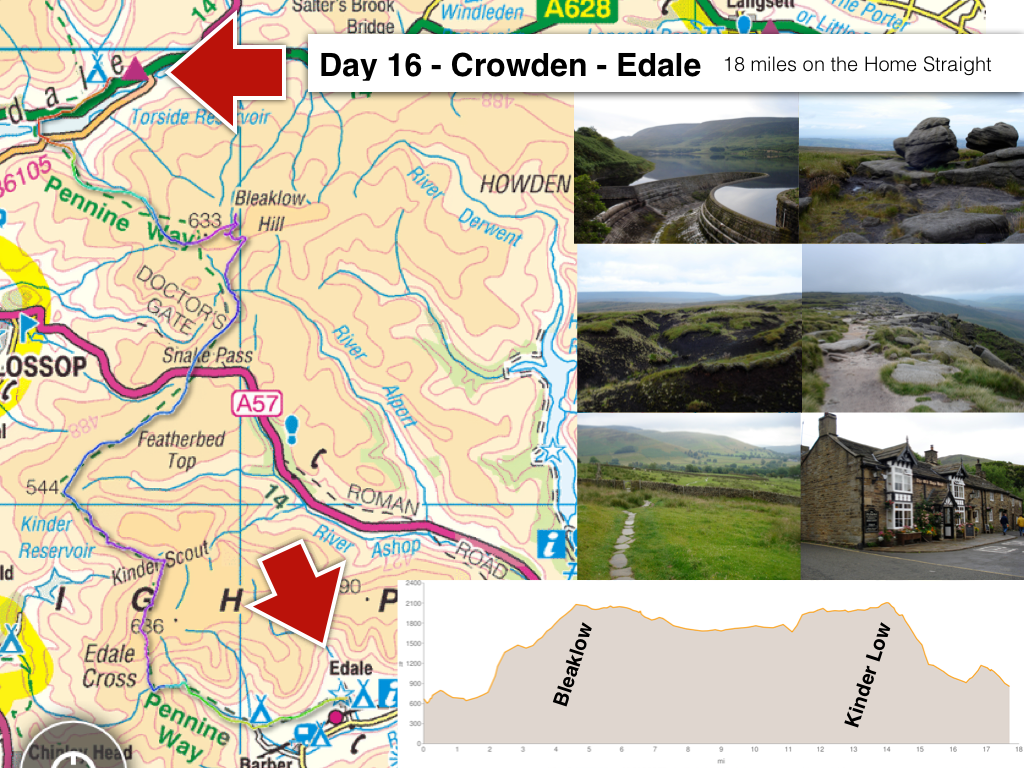 0600 Crowden
A miserable night - cold mainly, not much sleep. Am making coffee and breakfast and will then pack up and leave. Tired and cold.

Today, 6 miles from home, was the first time I got lost on the whole walk, on Bleaklow. I mean it! Properly lost. Without GPS and map I might have either ended up somewhere completely wrong or been wandering around up there for hours :( Still, eventually I got myself back on track.

Featherbed Moss was totally boring - 2.5 miles of slabs - already in agony.
Kinder Scout - too long.
Jacob's Ladder - too steep.
Path to Edale from there too long and last little hill, you don't even normally notice, 50m ascent, brutally cruel, just like Wainwright's last hill before Kirk Yetholm.
Still, I DID IT :)

Wow! I didn't think of much else on this day except getting to the end. On the tramp across Featherbed Moss I started counting steps to get myself through it. Now, looking back from 4 years away, the pain is a distant memory and it seems amazing that I can have been struggling so much. But reading my journal makes me remember that I was! Today and yesterday would normally have been great walking days, but at the end of the PW they were very very hard.

You can see on the masthead picture for today how wrong I went on Bleaklow. It all looks the same up there! I had to take a bearing towards Higher Shelf Stones and go in a straight line over all the haggs and groughs to intersect the PW path. At the time I couldn't understand what had happened, but afterwards from looking at the GPS trace I realised I had come to the Wain Stones and Bleaklow Head in the wrong order, because I was following the path on the ground rather than the line of the PW. So that set me in completely the wrong direction because I knew it was straight on at Bleaklow Head! Very confusing.

I really did cry a bit coming down the path into Edale. I didn't cry later, just had a rest :)
Posted by Andrew Markwick at 15:44:00