Today I decided to take it easy in the morning, to give my arse time to recover from yesterday! So I had my breakfast and then went for a walk to the Castle again. I went in the Minotaur Maze, a piece of art close to the Castle. It wasn't too difficult to get to the middle and getting out was easy because I could remember the turns I had taken. A bigger maze would've been better I suppose, but it wasn't bad. 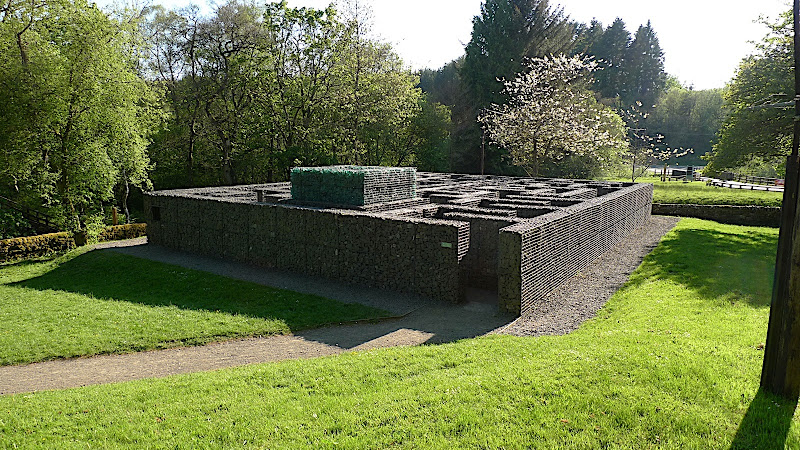 I had a coffee and a glass of water at The Duke's Pantry, got my little computer out and looked at routes. I decided to do the Lonesome Pine / Bloody Bush trail again, but this time extend it to go to Newcastleton 7Stanes red trail. So, a loop of about 40 miles. At the back of my mind of course is the Kielder 100, and whether I'll be able to do it or not. This weekend is supposed to be about finding that out!

Back at the YHA I got my things sorted out, ate some crisps, and got ready. Smeared some savlon at the tops of my legs to protect the skin a bit. Then I went and fiddled a bit with my bike, oil, resetting the wheels and so on. Everything good.
The trails round here really are good for XC. I'm sure downhillers don't find them exciting enough, but for my bike and me, they're perfect. The route up to Lonesome Pine is now familiar to me, and this time it occurred to me that there might be mobile coverage at the top. There was! Only stopped for a few minutes there though as it was quite cold. Nowhere near as hot as yesterday, but that's good because it was a bit too hot yesterday. Hey, I'm not complaining, but today the weather was more exercise conducive. 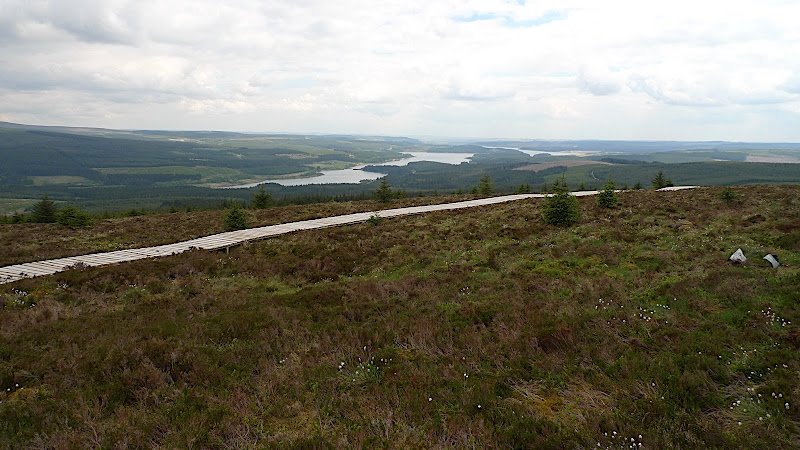 View back towards the reservoir from Lonesome Pine

Carried on to Bloody Bush and turned right to go to Newcastleton on the Cross Border Trail. Well signposted, but what a descent on the fireroad after the pass! Went on for ages. And Bloody Bush road really does look like an old road. It is easy to imagine horses and carts using that track, even now. If a film ever wanted to find a location atop moors with an old road, they could do worse. 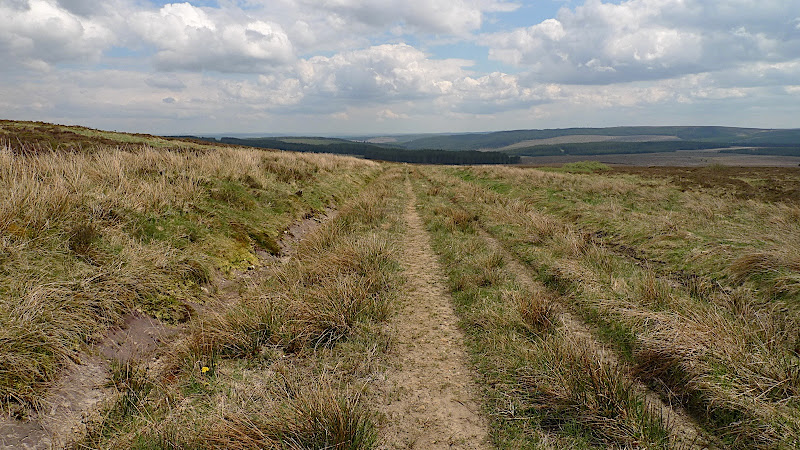 At Newcastleton I looped around on the red trail. Confirmation that Deadwater is harder than a red, this was more what I expect from that colour. Great for XC with a few hairy bits thrown in but nothing scary, and no getting off bits. Turns out that the Exposure 24 race was on Saturday, and a lot of the signage was still out. That was a 24-hour solo race, so the trail marking was quite detailed, for the dark hours. There was one bit though where it would've been fairly easy to go off an edge if your concentration lapsed at the wrong point. But all in all it is easy to see why they chose Newcastleton for this race (first running of it) - there's not a great deal to go wrong in the dark. It's not a difficult loop. Perhaps I should do that next year - 24 hours on the bike sounds a bit painful, but that's what it's all about ;)

Anyway,, at the back of the loop is the Border Stane (an engraved stone). Here I had to decide what to do. My original plan had been to go all around the red route and then up back the way I had come to Bloody Bush. However, the alternative was to come back here (to the stone) and then turn right and follow the Cross Border Trail like on Saturday back to the turning for Lonesome Pine again. Given that amazing descent would now be a climb, I decided for the latter option. Not that I'm scared of a long climb you understand, just makes it a nicer loop ;) 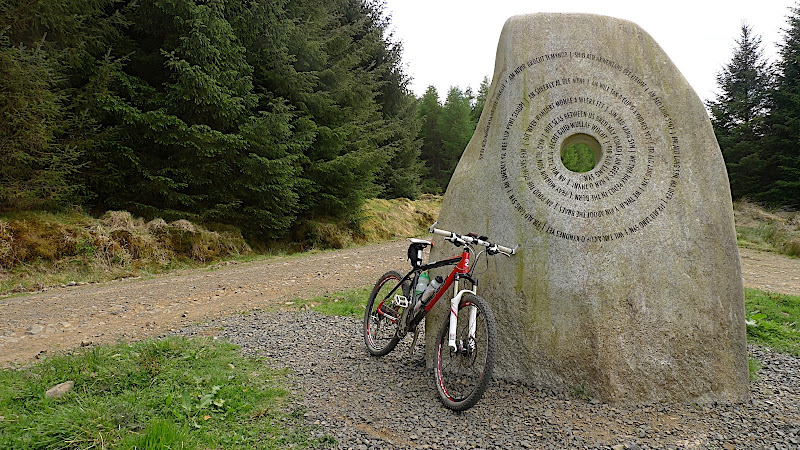 To get back up to Lonesome Pine, now the fourth time I've done that - it occurred to me that there really is no substitute for knowledge. Every time I've done it it's got easier, mostly I suppose because of knowing what's coming.

At Lonesome Pine, sent a tweet again, exploiting the only bit of signal coverage I've had this weekend, then plummeted off the mountain on the trails past Skyscape and down to Kielder. Those trails on the descent are fantastic, flowing, not scary, fun!
Back at the YHA I cleaned myself up and went out to the pub. Closed! Worried that I'd come unstuck and already hungry, I went back and asked Richard if he was doing dinners tonight. Turns out he was making a vegetarian three bean salad for the lady who's also staying, said there was enough for me too! Lucky, I said I'd eat anything. Ten minutes later, eating a lovely salad - I wouldn't normally choose vegetarian options but maybe I should, the times I ever have I've always found them to be very tasty, often tastier than meat dishes. Anyway.

Bought a few beers from the office and now watching England v Mexico, the last friendly before the World Cup starts on June 11. Full time score, 3-1. Not exactly as convincing as the scoreline suggests...

Today I have almost reached the 1000 mile mark on my 'new' mountain bike. I have now done 998 miles on it, since I got it last October. Tomorrow, therefore, I will pass 1000 miles, somewhere along the Lakeside Way. Today I have also surpassed my monthly record for altitude climbed on bike. So far this month I have climbed 21000m. To put it in context, the previous record month was last month at 20600m, and the previous before that was July 2009 at 15600m. I have also biked more mountain bike miles this month than any other 'since records began', which was August 2007. One may confidently assume this is the same as in my life so far. I am only about 50 miles short of my monthly record for distance as well, which means I will definitely surpass that one too, maybe even tomorrow, with almost a week to spare. God I'm good. The program mytourbook, which I use to record all my rides, is really awesome in the statistics respect, and you know how much I love statistics ;)