For the Bank Holiday weekend just gone by I decided to go and explore a bit of the Forest of Bowland, somewhere I'd heard of but never been. I think this is because it lies between the Yorkshire Dales and the Lake District, and so always went to one or the other, and missed it! Needless to say, it's beautiful - remote moorland, quiet country lanes - perfect cycling country. There aren't many off road tracks, but the ones there are are brilliant, as we'll see below.

I stayed 2 nights in the Slaidburn YHA. This was a good choice - I mean, you get what you expect, but everyone is quite friendly and they are still much cheaper than a B&B or hotel. This YHA used to be a pub - and Slaidburn means "slaughter by the river" - just so you know. 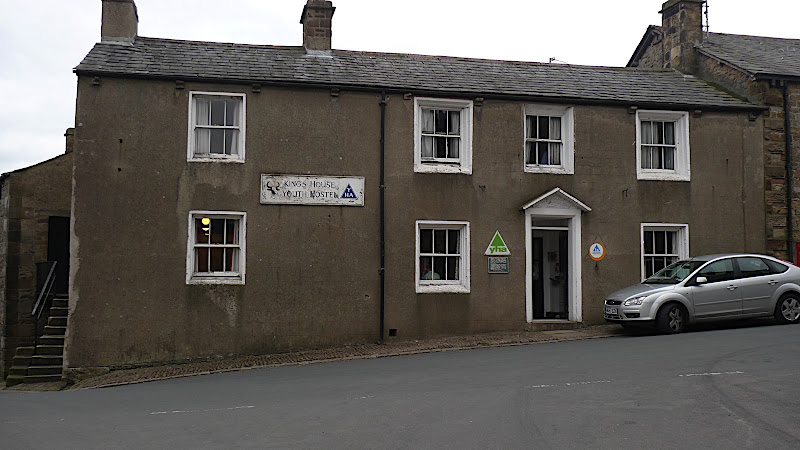 The first day, Saturday, I took the train from home to Preston for the princely sum of 14.50 GBP return. I am always slightly nervous about going on the train with my bike, mainly because I'm always worried that there won't be room to fit in. The Transpennine Express from Piccadilly to Preston was full to busting - but! I know a trick on those trains. You go to the First Class carriage at the front! No one ever goes there because they assume it's all First Class, but it's not! You can stay in the (quite large) area near the toilet, where there are about 6 seats and plenty of space for a bike. You have to stay with it, but I'd do that anyway and for 47 minutes it's not too bad.

So anyway, I arrived at Preston and set up my gadgets and off we go! I took National Cycle Network route 6 north out of Preston. That was really well signposted - I didn't have to think which way to go once. The Ranger system (of which I am part of course) must be working well I think. The route near to Goosnargh has obviously changed since my OS map has it going through the grounds of a hospital, but now it is clearly impossible to do so and the current OS maps like on bing.co.uk show the actual route going around on the road. Just north of Goosnargh I diverted off the NCN which continues to Lancaster, and headed via country lanes to Chipping, where I stopped in The Sun Inn for food - bangers and mash in fact, and a pint of Black Sheep.

After Chipping, my route took me off road, turning north at Leagram Hall Farm and proceeded via the North Lancashire Bridleway to join a good track at Stanley. A road mile further on and another left turn took me via a good track to a bridleway leading through Lower Fence Wood. This was a fun bit of singletrack through the trees, subsequently over open moorland and then a fantastic grass descent to Hareden. 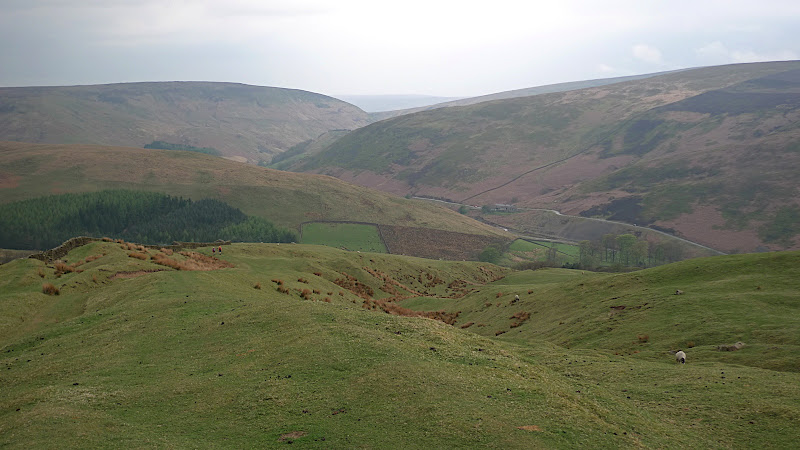 Next I followed the road to Dunsop Bridge, but decided to leave Dunsop Fell for tomorrow. Continued to Newton, turned left and went up a climb to New Biggin, getting good views of Beatrix Fell, Burn Fell and Dunsop Fell. Finally, the road drops down sharply into Slaidburn.

Upon arriving, found the YHA and the local pub, Hark to Bounty, no problem. Slaidburn isn't a big place, and they are next door to each other. It was four o'clock but the YHA was not open yet. Another cyclist, Steve, had arrived. He was obviously doing a big ride because his bike was covered in panniers! Turns out he was on the LEJOG, day 7. He'd come from Ellesmere that day. Then a girl arrived on a full-suss mountain bike, with a big rucksack. She was going to go walking and had biked in from the train at Clitheroe. Anyway, 5 o'clock came around and the warden arrived and let us in. I had a shower, and then went across the road to the pub to look at my map and so on. 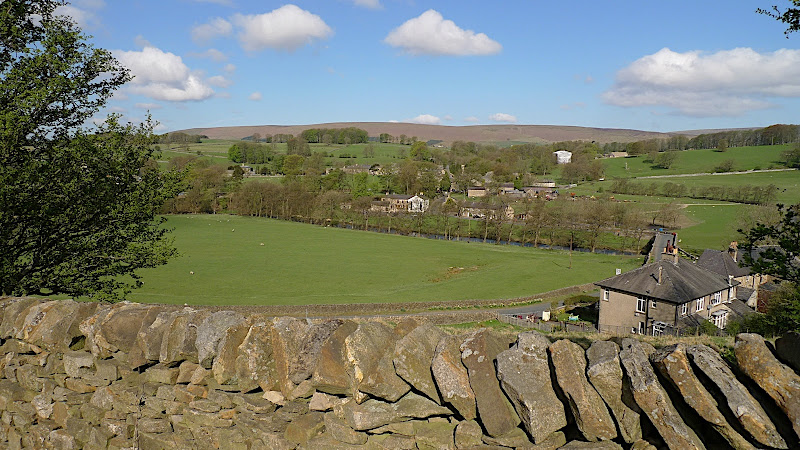 Slaidburn, a quaint village on the Lancashire/Yorkshire border

On Sunday I went and did a big ride over Salter Fell (great track) and looped around quiet lanes to the road that goes through the Trough Of Bowland. The track across the fell is really brilliant - I didn't see anyone else up there except for sheep and two motorcyclists (probably legal as it's an 'other route with public access'). The track was quite loose and rocky in some places making some tricky climbs, but most of it was lovely offroad moorland track. Once back onto road, some farm gates had dead moles hanging from the nearby fences! I'm not sure how that is supposed to deter the creatures (if indeed it is), since they can't see anyway. But hey! Interesting local custom? Competition between farmers? You decide. 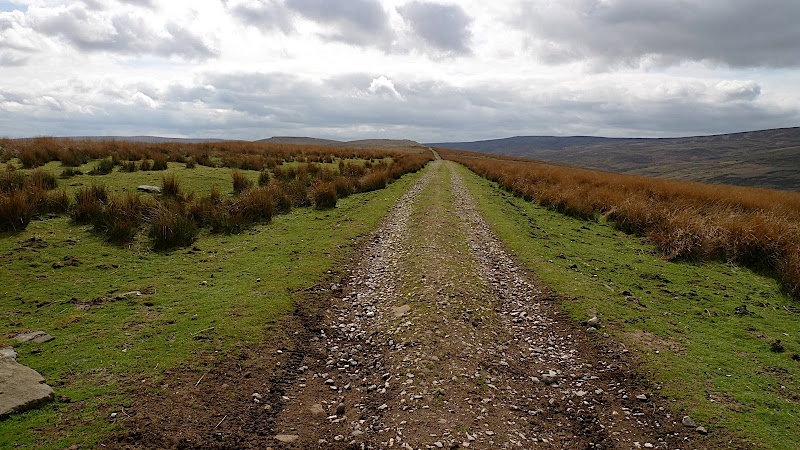 The road through the Trough of Bowland is great, especially in the north-south direction I took it in. A steep initial climb, followed by some rolling hills, followed by a gradual climb gets you to the top of an awesome and steep road descent through the Trough proper. Didn't (couldn't bring myself to) stop and take a picture! At the bottom was a roadside cafe where I got a cheeseburger (0% meat? only kidding - it was lovely) and a mug of coffee.

At Dunsop Bridge I took the bridleway that I passed on Saturday. That went up a farm road to Whitendale where the path turned steeply up Dunsop Fell. A fair amount of that was unrideable (for me, at least), so it was 20 minutes of hikey-bikey. Not my favourite thing. But then, the descent back down to the road was mostly grassy and finally some great singletrack requiring concentration. The last bit was farm field agricultural bog rubbish, but only for a couple of hundred metres or so. In total, that route was about 38 miles. 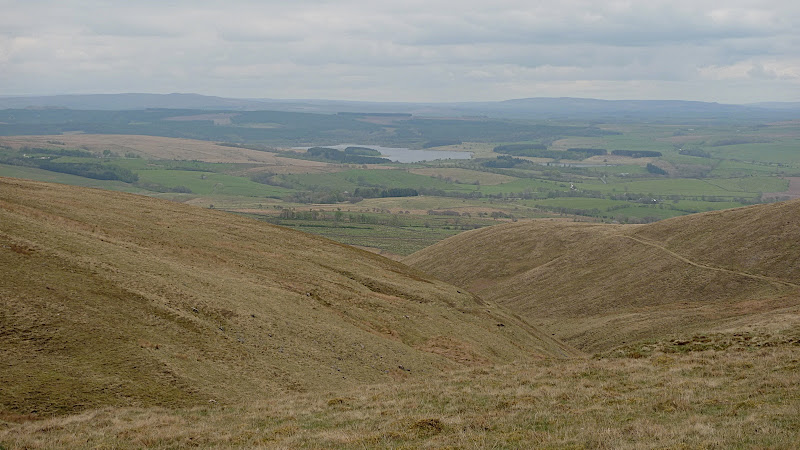 I got back about 14:45 and locked the bike up, went for some chips in the pub, then sorted my stuff out to go back out to Gisburn Forest and do the trails there. I didn't want to hump my bag around so I only took the minimum stuff. The trails were very good - some tricky rocky bits, but some nice singletrack through trees and across forestry land. Not too much fireroad :) At the black Whelpstone Crag bit (of YouTube fame) I ran into a couple of guys. One of them was going to do the steep bit - he wasn't wearing a helmet - nuts! Anyway, shortly after I caught them up again and they asked if I wanted to go around with them. I did for a bit, but then I was getting a bit tired since I'd already done about 50 miles at that point! So I called it a day near the reservoir and roaded it back to Slaidburn. 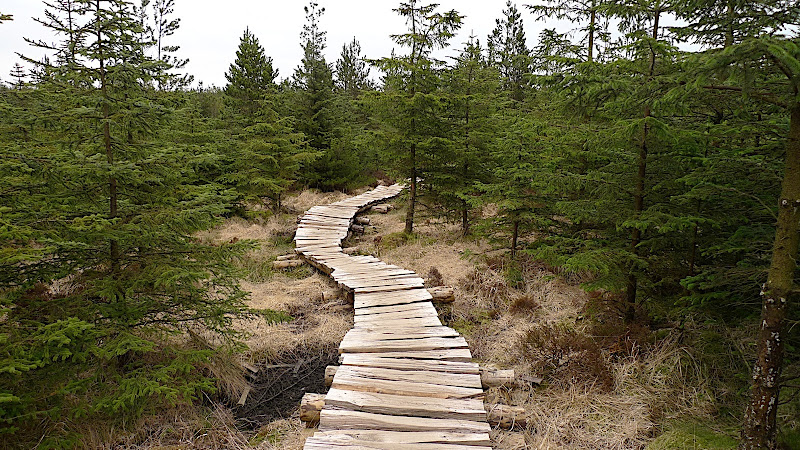 Had a nice evening looking at maps and reading my book, had a lovely lasagne in the Hark to Bounty, then Vicky (walking girl) came in and we stayed there until nearly midnight! She was very nice - it is good to run into people at random like that and get on with them :)

On the Monday I left the hostel after sorting everything out, and made my way back to Preston on a vaguely circuitous route via Waddington - where I stopped for coffee and coffee cake, and saw a bit of the Scarecrow Festival - Birdy Brow (tough long road climb) - and Ribchester, where I saw the church and the Roman Museum. It might be good to go in there one day. A bridleway (the Ribble Way?) took me along the river to a road leading to Longridge - then joined up with NCN 6 again to get me back into the centre of Preston.

Direct train to Hazel Grove meant that I decided to bike back from there. Almost rained on me, but held off. Home! Great weeked, total of 131.5 miles, 6603 m of ascent, 12 hours 33 minutes moving time in the saddle. Brilliant. Also, the weather was pretty good - I could see the views all the time, it didn't rain, and it wasn't too windy!