My final day of this expedition, with a lot of miles to cover. Packed up straight after breakfast, and got underway about 0930. The first section of the route was well known to me by now, along the south shore of the Lakeside Way, until just before the Tower Knowe visitor centre. Here began the bit I was most concerned about for today - the crossing of a vast tract of forest to join a road a few miles from Hadrian's Wall. Yesterday I took Memory Map and plotted all the junction points of forest roads marked on the map that I needed to reach and labelled them with the junction number and direction I needed to turn in. Then I saved those points out as a GPX file and imported it into BaseCamp, from where I could make a route out of those points and upload it to the GPS. This way, I would always know how far away the next junction was, and in what direction. I figured that with map, GPS and waypoints, even if I got stuck in the forest I wouldn't be lost. It worked out well. There was one moment where I was a bit hesitant, because this is of course a working forest, and it had crossed my mind that I might run into logging operations or something. I did come across a sign at one point that said 'No Unauthorised Access - Chemical Spraying' which doesn't sound good, but I could see the men in the felled area in white suits and they were a long way from the track, so I just continued regardless. It was only about a 300m stretch anyway. Having the junctions in my GPS made me feel a lot safer, because you really are miles from anywhere in the middle of that forest. At one point I followed a bridleway sign into really thick forest and cut off a corner of the fireroad. If you were walking through here it would be very boring I think. Inside the forest it was really quiet and dark. Quite spooky. 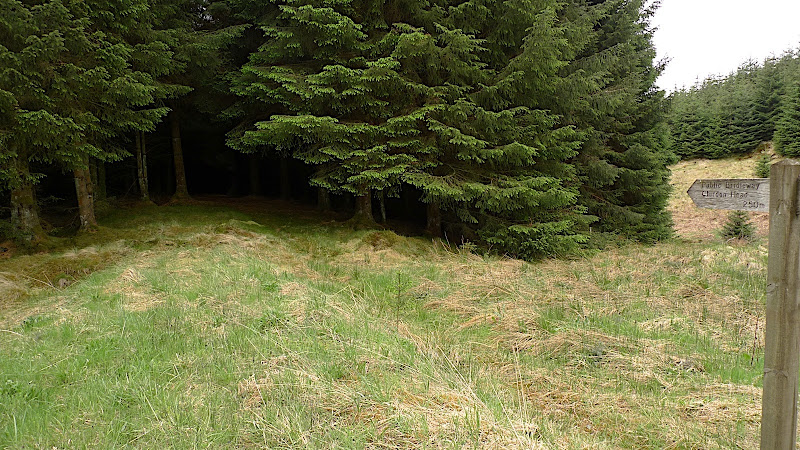 Into the abyss, bridleway in Kielder Forest

After the first long stretch was over, I emerged onto a little tarmac lane between farms, with cows on the hillside and … a Royal Mail van coming up the hill! Our postal system is pretty impressive. Let's hope the new coalition government doesn't ruin it, although I fear they will by selling off part of it. Anyway, a drop downhill and a right turn later, and I'm on NCN route 68. That's right, 68, the one that runs right past my house in New Mills. It's a long route! This section goes westward to Grindon Green (ruin) where, after a mile or so, it bears south on an old road / track. This track puts you out on a tarmac road a few miles north of Hadrian's Wall. I took a bit of an extra loop so that I could go past the really impressive part of the wall I remember from the Pennine Way - that above Once Brewed. Stopped there and took some pictures, sent a tweet (now back in signal land!) and thought a bit over the PW adventure again. The sign near the wall here makes me laugh - it reads 'In the interests of archaeology please do not walk on the wall' or words to that effect. I mean, the thing's been standing for 2000 years, had most of it taken to build the local farm houses, 'castles' and stone walls, people used to walk on it. I really don't see the problem. Don't take bits of it home, right enough - but don't walk on it? Silly. It's also rather interesting to consider that Hadrian's Wall is a UNESCO world heritage site but it is in fact a manmade fortification cutting across beautiful countryside. Today, such a monstrosity would never be contemplated - but because it's old, it's worth preserving even! Don't get me wrong, it's fantastic to have such a thing from the point of view of our history and the history of the Roman Empire, but don't you think it's strange? 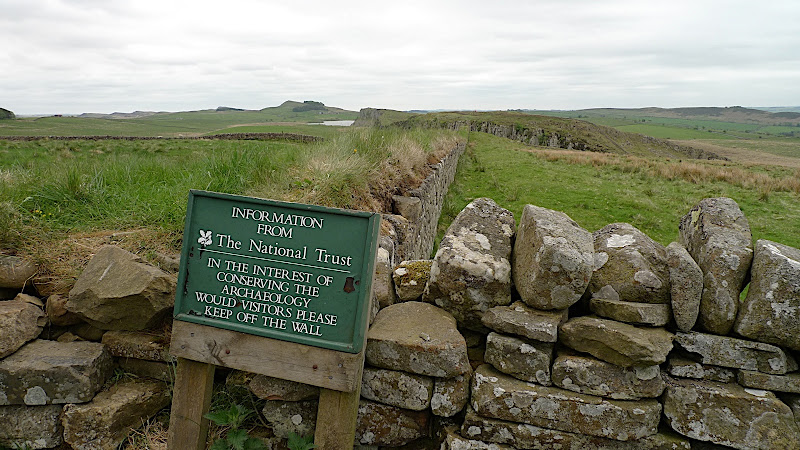 That thing with the grass on, that's Hadrian's Wall

Ramblings aside, I continued on along the Roman Road which is now the B6318. This really is a straight road! Up and down it goes, undulating with the terrain, but dead straight. I turned off it onto the Hadrian Cycleway just before Greenhead, reflecting that I'd just done in less than an hour what I walked in a day on Day 4 of the PW (short day that was, Once Brewed - Greenhead, 8 miles). After Greenhead I passed through Gilsland, and on to Birdoswald, Roman Fort. Here I stopped for a rest, having done 40 and a bit miles so far, and some food. A Hadrian cheese and tomato sandwich, and a coffee. Nice. I maybe should have looked around the fort, since I'm a member of English Heritage it would've been free, but I decided to press on on the grounds that if I stopped for too long it would be very hard to finish the day's miles. 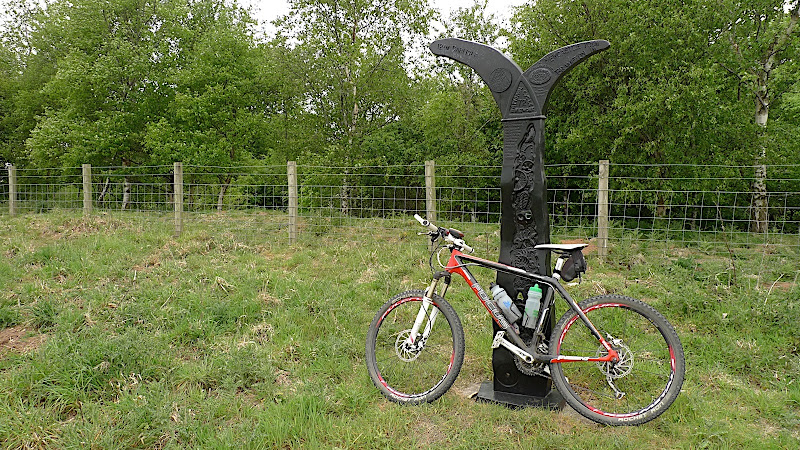 Which numbered 21 remaining. I wasn't entirely sure what route I was going to take into Carlisle, but after a while I found myself on NCN route 72, which goes to Carlisle, so I stopped worrying about the route and followed the obvious signs. The NCN rarely takes the shortest route, because it aims for traffic 'low' or 'free' routes, and sometimes it feels like you're going round in circles just to avoid a short stretch of busy road. But it's great! I didn't really care how long it took to get there because I knew I'd be early for my train anyway. So passing a milepost with Carlisle 12.75 miles on it was good enough to just keep following the blue signs. NCN routes often go over any visible hill as well (again, these are usually the traffic 'low' routes) just to keep things interesting. The route into Carlisle city centre was quite involved, and at one point near a school I lost it, so played with Carlisle's rush hour traffic and one-way system for a while, to find myself back at the station. With an hour to kill I went looking for a real ale pub, but struggled to find one! A google search on the iPhone later, and I was at the King's Head. Good beer, nice, quiet pub. Perfect. 2 pints to finish off a great long weekend.

Train(s) back home were uneventful - direction and time of day meant it wasn't busy at all.