Up early, 0630. Washed bike. Packed bag. Train at 0901 from New Mills Central. Met Ciska at Piccadilly for a coffee, and bought some travel sized toiletries from Boots, good for my small rucksack. Train out of Manchester at 1016. The usual nonsense trying to get on the front carriage. A large group with a wheelchair got on, then got off again when the station guard realised they couldn't change platforms at Oxford Road. Hmmm. Anyway, meant I could get on easily with my bike.

Standing and messing about moving the bike until Lancaster! Then the train was almost empty, across the Lakes. Some funny girls came to use the toilet - three of them - and played pranks with the door, first repeatedly opening the door while their friend was inside, before she had time to lock it, then, funnier, repeatedly closing the door while another friend was trying to open it! Well, you had to be there. It was the most eventful part of the journey - apart from the scenery which was beautiful, especially in the glorious sunshine.

Got off at Carlisle, of course, and set myself up outside the station in the shadow of the Citadel. Got on NCN route 7 northbound, passing by Carlisle Castle. It's English Heritage - had forgotten that. There must be an outside chance that I will visit it on Tuesday, if I have time and if there is somewhere good to lock my bike up.

A few miles outside the city I rang Alison to wish Aimee a happy birthday - apparently they both (ie. Andrew too) love the Gruffalo colouring pencils I bought, but they're Aimee's of course. Hope that doesn't cause too many problems!

After some miles, I ended up on NCN route 10, the Reiver's Way. My carefully planned route to stay on country roads with little traffic worked brilliantly. I only saw one car in 25 miles, or thereabouts (only a slight exaggeration, I assure you). The downside of this route was that it didn't pass anything like a pub or cafe, which by the end I could have definitely done with. Anyway, after passing Bewcastle, the miles passed by until I arrived at Kershope Bridge and the Scottish Border. 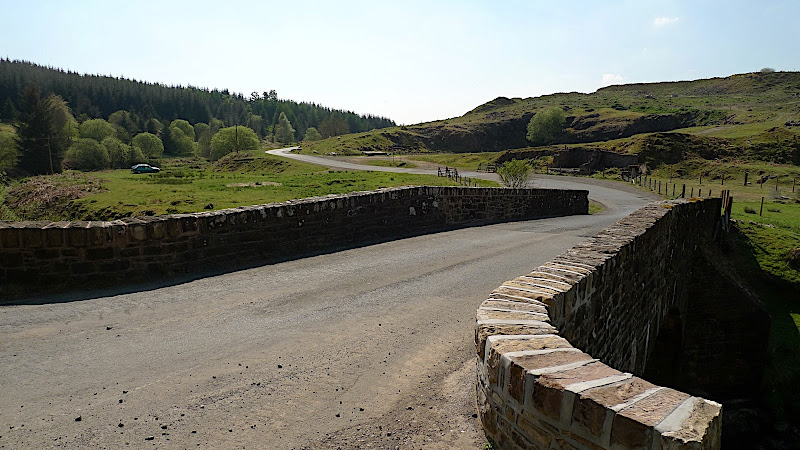 Here I joined the Cross Border Trail, basically forest road which follows the border and Kershope Burn (or I suppose, follows Kershope Burn as does the border). Starting on the English side, but soon crossing over into Scotland, a long, steady, gradual climb ensued, but in glorious hot sun. Thirsty, I was running out of water. No chance to refuel, I just had to keep on going ;)
At the waymarked point, I left the fireroad and crossed back into England. Some singletrack through a felled area, then back on fireroad. Ultimately it joined up with the trail markers from the Kielder routes, but I kept following the Cross Border signposts, which dumped me out finally on the road, which I followed for the final few miles into Kielder Castle.

Found the YHA no problem (there's not much in Kielder!) and got my key. I'm the only one in the dorm tonight, perfect! Decided to have dinner in the hostel tonight - soup, tuna pasta salad, and fruit salad. Very tasty :)

Excited about the prospect of MTB trails, I went out straight after dinner to do Deadwater Trails, the man-made route up Deadwater Fell. I reckoned I had enough daylight left to do the 10 mile loop, and so it proved. The climb up onto the fell is quite long and drawn out, but with the failing light of the wonderful day, the views back down the valley to Kielder were impressive. 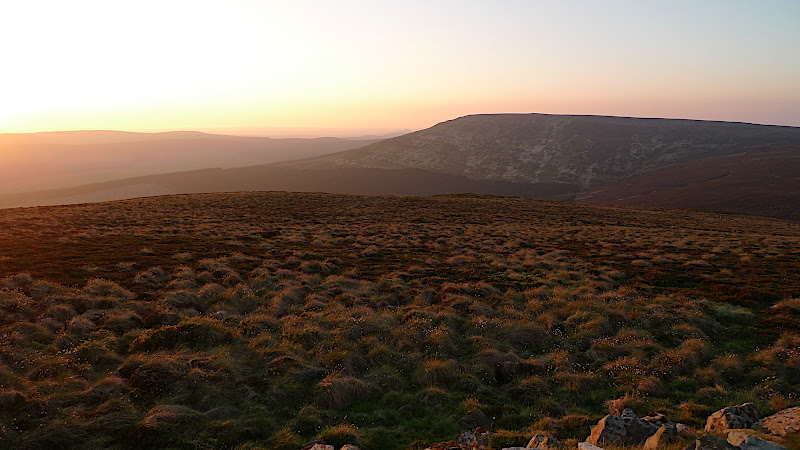 View from the top of Deadwater Fell, looking north

Now then - Deadwater Trails is a red route. But, parts of it are very difficult. I don't like scary downhill stuff, and I think this trail is black in places. A wuss, I am, but hey - I've done a lot of these kinds of trails, and I reckon this is, in places, technically harder than all of the other red routes I've done. It's just not my thing I guess. Even though I know they must be rideable because they're man-made, I can't do it. Fear, and my hardtail XC optimised bike conspire against me! So I won't be going back and doing the black section of this trail, not on this bike ;)

Got back to the hostel, found no one around to give me the bike shed key, so, as I'm on my own, took my bike upstairs to bed.