Set off after breakfast, to explore the other man-made trails here, the Lonesome Pine and Bloody Bush trails. It's possible to link them up making a good 20 mile loop. Start off on the Lakeside Way - an easy trail that goes all the way around the Reservoir (more later). After a few miles, where the trail goes under the road, the red LP route branches off into Lewisburn Valley. This is a nice trail, much more Andrew friendly than the Deadwater Fell one - just flowing singletrack through trees. Lovely. After some time there is the obligatory fire road, but somehow the fire road in Kielder Forest doesn't feel as bad as that in, say, Whinlatter. Maybe it's the gradients - you know I'm gonna check that later when I recap the weekend, sad case that I am!

The section on the map where the Bloody Bush Start / Finish is marked isn't built yet! That kind of surprised me a bit, but definitely it's supposed to start on a certain corner, and indeed, there are red flags on trees where they clearly plan to build the singletrack, but it ain't there yet. Anyway doesn't really matter, having too much fun to moan about that. And it was sunny - hot - sun cream weather again - two days in a row, wow! 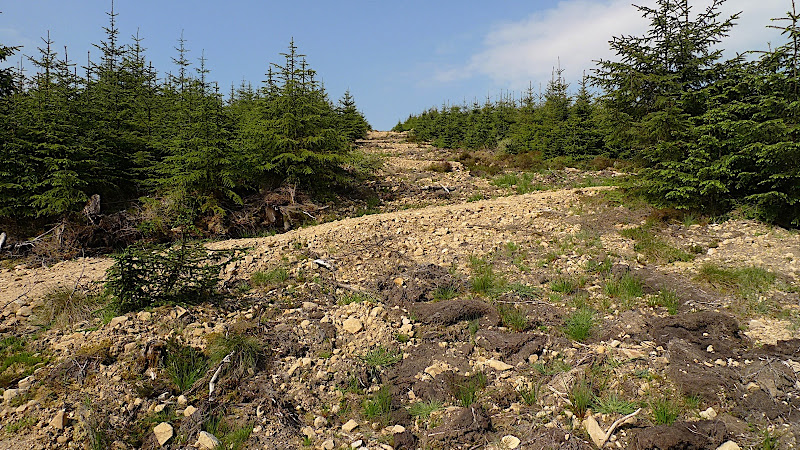 Switchbacks up to northshore at Lonesome Pine

The last bit up to Lonesome Pine, obviously so-called because it's a big pine on it's own on the hillside, is first a steep rocky set of switchbacks, and then, north shore. Lots of it. There is a junction at the top where Bloody Bush goes left and Lonesome Pine goes right. On the board there it even mentions the Kielder 100 from last year which was the first 100 mile singe lap mountain bike race run in this country. The winner took 8 hours something. I won't! Anyhow, the north shore is 2m wide! Apparently, this is because if it's a windy day, it can be so bad that you need 2m to be blown into. But there's a lot of boardwalk up there - more than I've seen anywhere else, so far. 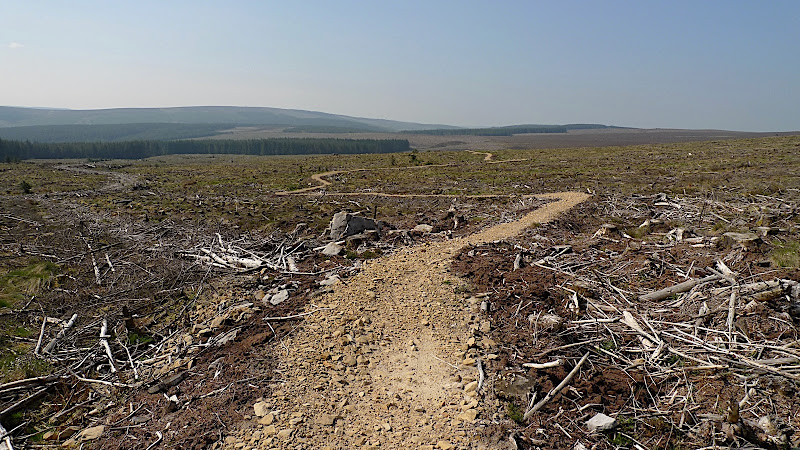 Turning left, the trail goes down off the hillside, and into woods. Again, lovely flowing singletrack, although the Bloody Bush trail does feel a bit more rugged already. Climbing again through the forest, totally disorientated, emerging onto a felled area again. Then a long descent with some avoidable jumps thrown in. There's a chimney visible across the moor, but I can't look at it properly because it would mean taking my eyes off the trail, which wouldn't end well. Getting closer to the 'chimney', I realise that it's the Bloody Bush pillar. On arrival, this is the England-Scotland border, and the pillar is engraved with the costs of passing the toll and the distances to various places. Fascinating! 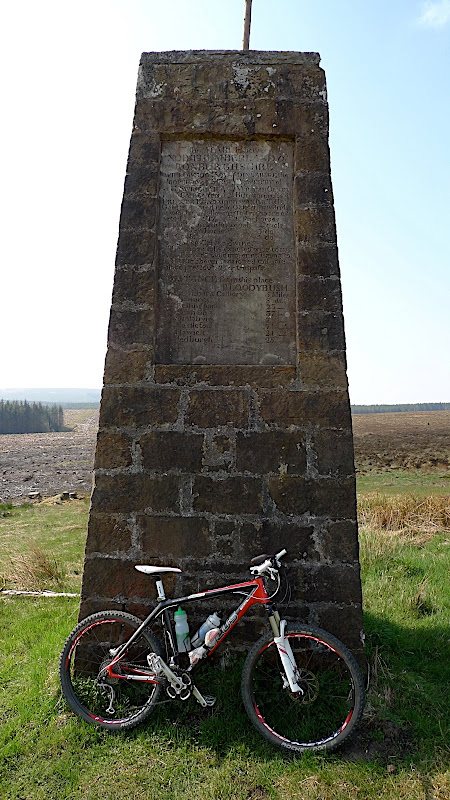 I put a toe in Scotland, then carry on with the trail, down a brilliant singletrack / fireroad descent. Eventually I arrive at a point I was at yesterday, where this time I turn left and go back up to the corner where the Bloody Bush trail is supposed to start, and back up to Lonesome Pine. This time turn right, and drop down fast on north shore, rocky trail and flowing stuff through trees.
Passed by Skyscape, some kind of viewing experience for the dark night skies here in this remote area of the UK. Then some awesome singletrack descending on rocky trail down a valley, and into the lower forest. Crossing a few footpaths now as we near civilization, and the Lonesome Pine trail dumps you out at The Bike Place, bike shop.

Getting hungry now, decided to ride to Leaplish to The Boat Inn for lunch. That was good - an outside table overlooking Kielder Water, watching boats, pint of beer, pint of coke, burger and wedges with chilli mayo.

What to do now? Well, I had thought to go back to Kielder and follow the 2009 Kielder 100 route, but in the end I went round the whole reservoir on the Lakeside Way. On the way, crossed over the dam - wide! - and then about 10 miles back along the north shore of the reservoir to home. 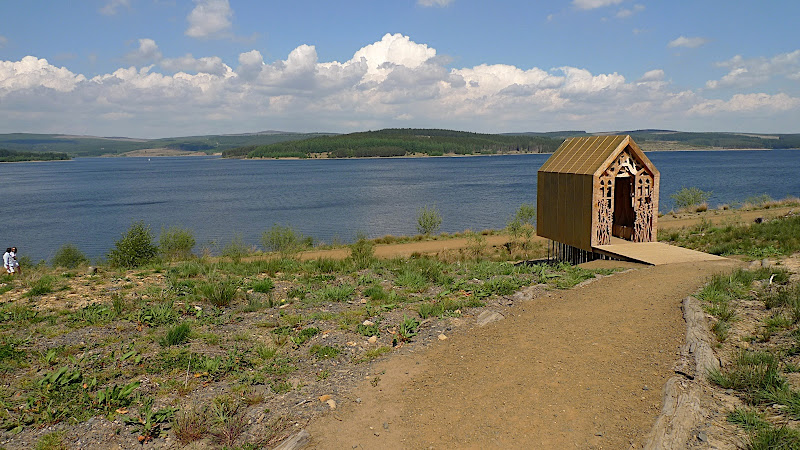 On the Lakeside Way, south shore.

Getting back to base a realised that my bottom was quite sore! Some chafed skin near the top of my right leg. Not good. Stuck some savlon on it and hope for the best I guess - still 2 days cycling to go! I suppose part of this weekend was about seeing how my body copes with four days of sustained cycling effort on this bike. I'm finding out :) Anyway, it doesn't feel too bad, should be ok, but better safe than sorry.